After a week delay due to that mean ol’ hurricane, Texas Aggie Football is here!

Ok, so I love football season.

The beginning of the season is so full of hope and anticipation to see how your team is after the off-season. This year’s anticipation is on a whole new level. We’re officially in the big leagues, boys, the SEC. College Station has literally doubled in population and its taking a toll on the infrastructure; thanks to the never-ending construction on vital roads.  Even though the traffic is a nightmare and the wait at all your favorite restaurants is an hour and half, its all worth it for that game day experience.

We get out to our tailgate spot early to set up, cook lunch (or breakfast if it’s an early game), set up the TV so we can watch other games going on around the country. An hour before kick-off, we head toward the stadium. As we walk through the tunnel, it is a sea of maroon. It’s pretty cool. We get to our seats just in time for the pregame videos and National Anthem. This video gives me chills, even if it is 100 degrees.

My sister and I decided to go to the mall today to pick up some Aggie gear, as if we don’t have enough already… but hey, new season, new wardrobe, right? Dad and David, if you’re reading this, don’t worry we didn’t go crazy! 🙂  I just HAD to get this tank though, I’m drawn to sparkle like a moth to a flame. It’s in my nature. 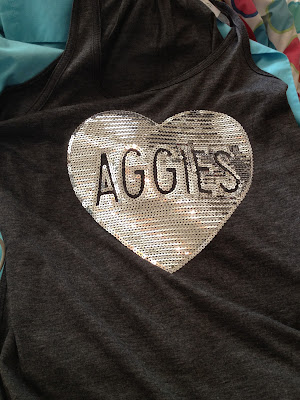